For children 3 to 7 years

The Train (The Netherlands)

Polka of the Rabbits (France)

Jibidi (France, remade by a Finn)

Round the Barley (generic)

Here are dances and musical games for high spirits and for different moods,

• dances to go round gathering everyone for dancing, and one for tired children,

• dances in which cold hands can clap,

• dances where a child is chosen and then chooses someone else,

• dances with arches or follow-the-leader,

• dances with songs, including lyrics in French,Greek, Maori and Spanish.

• Children are led (by stages, as they are ready!) into movement skills important in sports as well as the basic rhythms and steps of European dancing.

• They absorb concepts, language, number, spatial awareness, plus patterning and structure that are important but you can’t see.

• They catch musicality and get a highly motivated start into music listening skills,

• They get chances to lead and to think on their feet, all the while having carefree fun and vigorous exercise with their whole little community.

Explore! Feel free to experiment too. Be the Pied Piper – lead on! 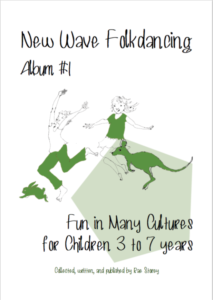